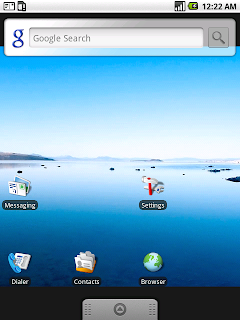 Android mobile stack requires no introduction as most of the devices now a days comes preinstalled with android as the smartphone stack which includes the GNU/Linux kernel and Android as the (rootfs + UI).
This place will be all about Android on the GTA02 device.
Porting of AOSP(Android Open Source Project) involves few changes be made for ARMv4. This along with custom kernel for GTA02 allows cupcake as well as froyo to be flashed on the device. The images can be directly flashed on the device instead of making use of SD-card.
Various components that make Android run on GTA02 are

Ranjit Pillai(InDi3MInD)
"Freedom" is a culture and is seldom enforced upon anyone. Select "the TeChNoLoGy" of your liking. Remember GNU/Linux is a culture and don't expect a miracle to happen in a day or two... Evolution == Evolinux Linux of yesteryear and the Linux of today ... it has taken great stride towards future.